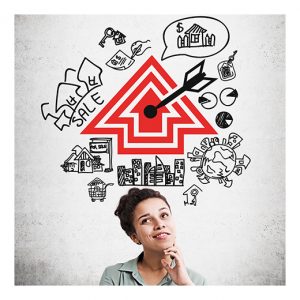 You’ve probably heard: student debt is over $1.3 trillion. And, according to a report by CNBC, it’s “growing faster than the average salaries for recent graduates.”

For a borrower aged 20-30, the average monthly student loan payment is $351. That’s quite a bit, especially when the median income for millennials remains relatively low. As reported by BusinessInsider.com, “In 2013, the median annual earnings for millennial women working full-time, year-round were $30,000,” states the report, “compared with $35,000 for their male counterparts.” A $351 payment can seem steep, since it accounts for about 12% of income for males and 14% of income for women.

Coupled with other expenses, from car loans to credit card debt, from housing costs to food, student loans are a heavy burden for many millennials trying to scrape by.

So, if you’re a millennial with a lot of debt, listen up. The following are things to consider before you buy a house. Like many others, you might find renting the better path.

Houses are sought for their stability. Even as markets change, a locked-in mortgage rate won’t. But the stability of a mortgage requires stability in life. Before you house-hunt, begin at step one. Think seriously about how stable your job is, your relationships, and career path. Are you expecting a promotion, or a change of scenery? Do you see yourself in the same job or relationship in five years? If not, a house probably isn’t your best bet.

Especially if you don’t plan to stay in a house long term, you should consider the payoff of picking up and relocating that an apartment provides. The assumption of many homeowners is they’ll be able to sell whenever they want. That, tops, it’ll take maybe a few months to close a deal. But as many learned during the housing crisis of ’08, when interest rates skyrocket, the equity of your house diminishes. The stability of a mortgage is a double-edged sword. There’s nothing to protect your home from future devaluation by the market. This isn’t a decision you should rush into.

Unexpected losses aren’t just restricted to market change. Other costs to home owning can also set you back significantly. The best thing to do is create a hypothetical budget. As HousingWire.com suggests, “Aim to keep total rent or mortgage payments plus utilities to less than 25% to 30% of your gross monthly income.”

To place the costs of owning in further perspective, imagine that, after you budget, you have $500 every pay period left over. One day you notice your refrigerator isn’t working. You have to buy a new one. You get the new refrigerator and it turns out that the issue is with the electrical wiring going to the refrigerator. You have to pay an electrician to come out, and it turns out your entire kitchen was poorly wired and needs updated. If you don’t have deep savings or a friend who happens to be an electrician, your bills can become, very quickly, too large for a budget with little room for error.

When it comes to renting, however, apartment complexes take care of all major maintenance issues, and many minor issues as well. And, though rent prices might be higher than mortgage prices in some areas, apartment complexes provide amenities that you’d usually have to pay for if you own a house: pools, weight rooms, clubhouses, etc.

If you’ve acquired large amounts of student or credit card debt, it might be a wiser choice to rent an apartment for a few years while you climb out of debt, and stash away some money in savings in the meantime. That way, if you get a house, you’ll be ready for unexpected issues and they won’t break your budget.

Want to join the discussion?
Feel free to contribute!

How Millennials are Happy and Productive in the Workplace